16 July 2022 THE YEAR OF MAGICAL THINKING by Joan Didion

By The Twyford9 March 2022 No Comments The details will be different, but it will happen to you.

This highly personal account of loss through the lens of hope unpacks a surreal and overwhelming time in Didion’s life as she faces the sudden loss of her husband John, and later her daughter Quintana. Deeply moving, sometimes funny, and ultimately joyful, this is one woman’s story of the journey to find acceptance, and the lessons learnt in letting go.

The Year of Magical Thinking enjoyed a critically-acclaimed premiere season at Melbourne’s FortyFiveDownstairs in 2019 that had audiences clamouring to see it – the 2022 tour will be a must-see for fans of great drama. 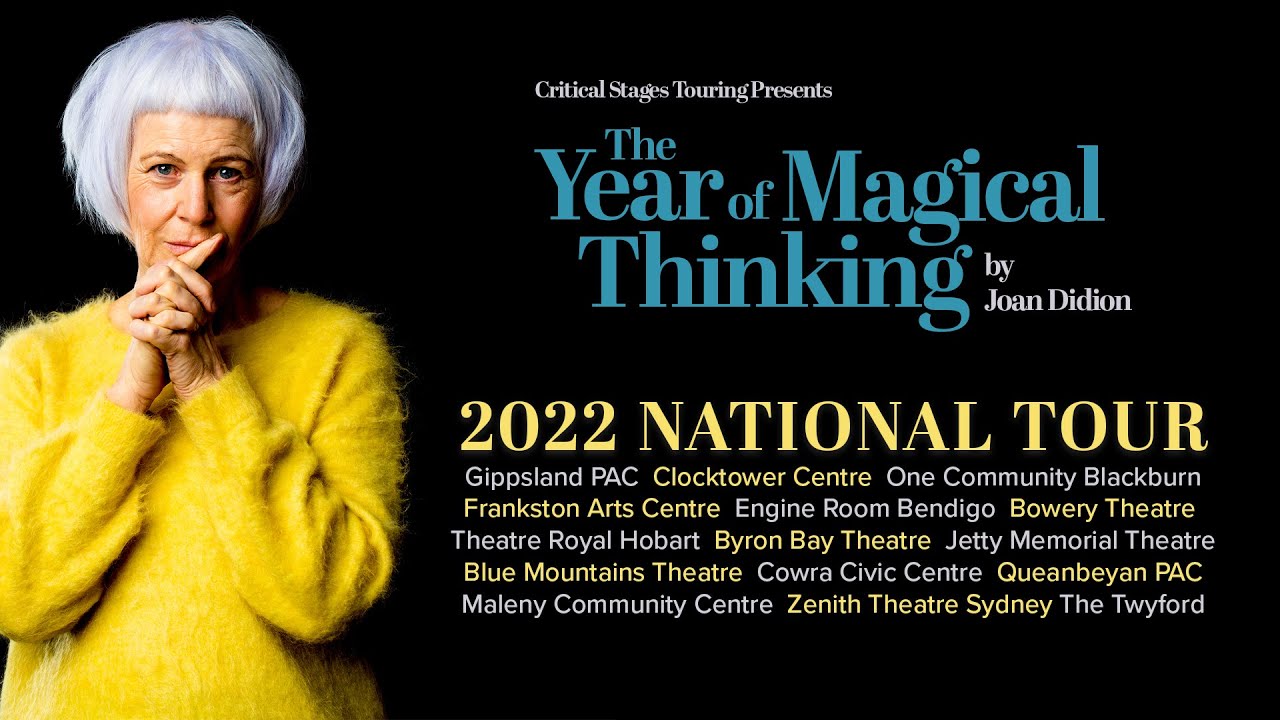 ⭐⭐⭐⭐⭐
“We felt like privileged listeners, given access to an extraordinarily insightful confrontation with the way in which grief loosens our grasp on reason” ArtsHub

⭐⭐⭐⭐
“The audience is mesmerised, holding on to every word, gesture, with eyes following her movements, taking in what’s been so eloquently said” Theatre People

“This is yet another fine – and, if you like, ‘magical’ – performance from Jillian Murray, aided and guided by Mr Strangio, who here shows that he knows very well that less is more.” Stage Whispers “We tell ourselves stories in order to live.”

Joan Didion was born in Sacramento in 1934. She studied English at Berkeley, and after graduating won an essay contest sponsored by Vogue. Didion moved to New York City where she worked as a copywriter and later an editor for the magazine. During this time, she wrote for various other magazines, frequently contributing to The National Review, and published her first novel, Run River (1963). The following year she married fellow writer John Gregory Dunne and soon afterwards the two moved to Los Angeles. In 1965 they adopted their only child, Quintana Roo.

The couple collaborated on a number of screenplays together including The Panic in Needle Park (1971); an adaptation of her second novel, Play It As It Lays (1972); and A Star Is Born (1976). While Didion continued to write novels in the following decades, she increasingly explored different forms of nonfiction: memoir, essays and political reportage. Her first collection of essays, Slouching Towards Bethlehem (1968) was immediately critically acclaimed. In 1979 she published a second collection of her magazine work, The White Album, which was followed by Salvador (1983), Miami (1987), After Henry (1992), Political Fictions (2001), and Where I Was From (2003).

Didion’s husband died suddenly in 2003, and in 2005 Didion published The Year of Magical Thinking, a book-length meditation on grief and memory, which became a best-seller. Two months before the book’s publication, her thirty-nine-year-old daughter died after a long illness. Didion adapted her memoir into a stage play, including the death of Quintana, which was first performed by Vanessa Redgrave in 2007 in NYC.

Didion kept to herself in the later years of her life, writing rarely and turning down requests for biography projects until her nephew proposed one. He crowd-raised the required funding to shoot it in a matter of weeks. Joan Didion: The Center Will Not Hold was released in October 2017. To watch the documentary is to feel that Didion may be under the lens, yet well aware of the power she so often held – a person who seemed to tell everything but give absolutely nothing away. When asked before her passing in December 2021 what people tend to get wrong about her, she replied: “I am not as fragile as people imagine me to be.”

The Year of Magical Thinking is presented by special arrangement with Samuel French Inc., and Concord Theatricals Company. This production was developed for the stage by FortyFiveDownstairs.

This performance is supported by the Restart Investment to Sustain and Expand (RISE) Fund – an Australian Government initiative.