1 May 2022 BE THE MOUNTAIN Tenzin Choegyal Tibetan-Australian musician and singer TENZIN CHOEGYAL takes you on a musical journey to the Himalayas.

Artist, composer, activist and cultural ambassador, TENZIN CHOEGYAL remains dedicated to preserving the musical traditions of his nomadic ancestors. Tenzin is a master of the lingbu (bamboo flute), the Tibetan nomad’s instrument of choice, and the dranyen (three-stringed lute), and is well-known for his extraordinary vocal ability.

Drawing on his Tibetan roots, Tenzin’s soaring vocals and exquisite flute solos express a deep connection to the wandering people of his homeland – lilting, nomad-style songs, Buddhist texts and poetry, and playful Tibetan folk tunes that reflect the experiences of the Tibetan people.

A son of Tibetan nomads, Tenzin feels a particular connection to the music of the wandering people of the Tibetan plateau. He fondly recalls his father’s flute playing and his mother’s beautiful singing as she went about her work, and attributes much of his passion to those early influences.

Tenzin and his family were forced into exile in India as they fled the Chinese occupation of Tibet. Growing up in the Tibetan refugee community in Dharamsala, where His Holiness the Dalai Lama actively encourages his people to preserve their culture through language, religion and the arts, Tenzin first began to explore his musical talents. Tenzin is a master of traditional Tibetan instruments the lingbu (bamboo flute), the Tibetan nomad’s instrument of choice, and the dranyen (3-stringed Tibetan lute). But he is best known for his extraordinary vocal ability and his mastery of droklu, the nomadic music of his parents.

Following his Australian debut Tenzin has well and truly made his mark on the world music circuit and is today considered one of the world’s finest Tibetan musicians.

He is an outstanding composer/performer with a great depth of musical knowledge, intuition and inventiveness, drawing on age-old musical traditions to create original compositions which uniquely express his cultural heritage.

With his powerful vocal style and warm connection with his audiences, Tenzin has become a favourite at music festivals across Australia. He has taken part in every Woodford Folk Festival since 1997, as well as performing at Port Fairy and Apollo Bay Music Festivals, Womadelaide, Byron Bay Boomerang Festival, Garma Festival, Denmark Festival of Voice, Canberra Multicultural Festival, Sydney Sacred Music Festival and many more. He has also given special performances at public talks by His Holiness the Dalai Lama in Brisbane, Sydney, Blue Mountains, Melbourne, Perth and Central Australia – an honour for any Tibetan.

While he proudly continues the unbroken nomadic lineage which is central to his musical repertoire, Tenzin also embraces opportunities to take his music away from the traditional and into uncharted territory, both in the studio and on stage. He enjoys experimenting with various genres including electronic music, jazz and indigenous music from African, Indian, Australian and Mongolian traditions. He is the first (and possibly only) Tibetan musician in the world to perform regularly with string ensembles including Camerata, Brisbane’s celebrated chamber orchestra.

Tenzin has nine independent albums, three of them with his fusion band Tibet2Timbuk2. He has also collaborated with several world-renowned artists to create major works for stage and film including The Last Dalai Lama? with Philip Glass (2019), Peradam with Patti Smith (2020) and the Grammy-nominated album Songs from the Bardo with Laurie Anderson and Jesse Paris Smith (2020) – a moving interpretation of the Tibetan Book of the Dead.

In 2008 Tenzin founded the annual Brisbane Festival of Tibet, which showcases Tibetan culture through music, film, art and discussion. He was musical director for the Asia Pacific Screen Awards in 2011 and 2013 and is artistic director for the Brisbane Himalayan Film Festival and the Women with Wisdom concert series (Sydney Opera House and Melbourne Federation Square). In 2015, in his role as ambassador for the Australian Himalayan Foundation, Tenzin travelled to the border of Tibet on the Nepalese side, the closest he has come to his ancestral homeland.

As an artist Tenzin sees himself as a storyteller, sharing his own story while also telling the communal story of his people and, as a human being, the stories of all humanity. For him music is universal, expansive and spontaneous, unrestricted by borders, like clouds drifting freely and taking different forms in infinite space.

But, above all, while never wavering in his efforts to keep Tibet’s cultural traditions alive, Tenzin firmly believes an even more precious legacy is that of Tibetan warm-heartedness, as personified by Tibet’s spiritual leader His Holiness the Dalai Lama. 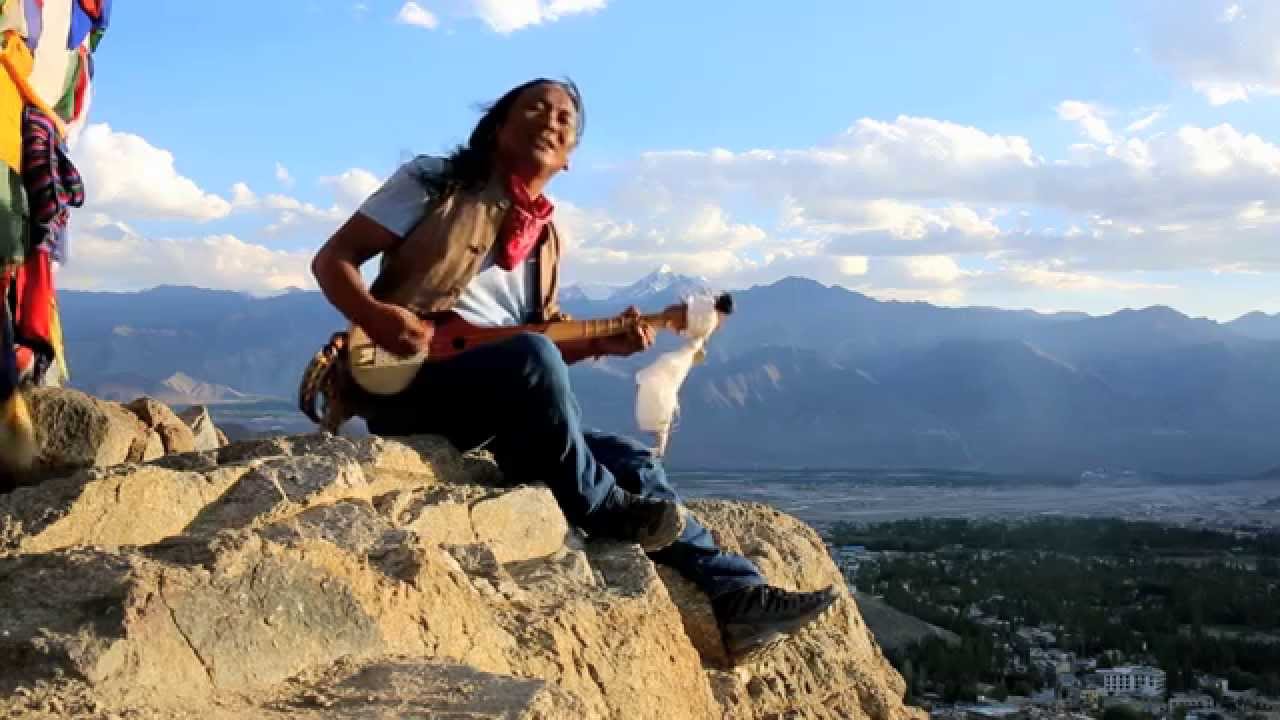 “Choegyal’s songs evoke the cold, thin, pure air of the high mountains while suffused with the warmth of love and spiritual devotion.”
– Stephen Whittington, The Adelaide Advertiser

“A rich in overtones male voice soars high, being able to reduce itself to whispers. It tells stories of love, soul searching and illuminated conversations with the Higher. Like a contemporary Homer, Tenzin accompanies himself by repeating the same rhythmic arpeggios on a plucked lute, his dranyen, his vocal lines interspersed with simple melodic interludes.

Music speaks a universal language. World music brings ethnic commonalities to the forefront by celebrating authentic languages of communication. Partaking in this spiritual narration, hearts were elevated, intellects stimulated and cultural wisdom transferred. What better way of focusing on peace and love than making music of the Tibetan tradition!”
– Daniela Kaleva, Australian Stage